Located between 20° 41' North Latitude and 70° 58'60" East Longitude, the tiny island of Diu is known for its breath taking beauty and a number of tourist attractions. It occupies an area of about 40 square kilometres. The picturesque city of Diu is located close to the Veraval port, making it easily accessible by rail, road as well as air. Thus it is an ideal weekend getaway for the solitude seekers, who wish to experience the sublime serenity of this place, as well as for those who wish to indulge in a variety of recreational activities, and merry making. 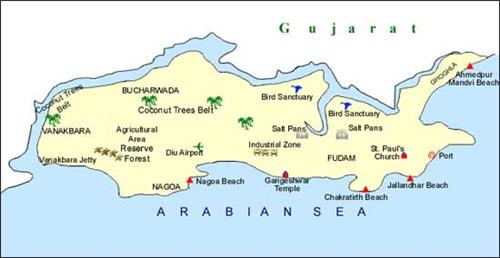 Diu enjoys a cool, but pleasant climate throughout the year. Due to its proximity to the sea, the regular sea breezes affect the climate of this place. In summer, from March to May, the minimum temperature is about 20o C, whereas the maximum temperature rises upto 36o C. In winter, during the months of November to February, the normal temperature ranges from 20o C to 26o C. Cotton clothes are preferred during summer, while in winter, people wear light woollen clothes. The south west monsoon brings rains to diu, during the months of June to September. The average annual rainfall received is about 55 cm. The best time to visit Diu is thus between October to May, when you can enjoy the scenic beauty of this place, indulge in a variety of activities and participate in various festivities celebrated here, during this period. One can also find a variety of migratory birds here, between the months of September to May.

Diu has a plain topography, the hillocks are at a maximum height of 30 metres above the sea level. The Chasi River to the north separates Diu from Junagadh and Amreli district of Gujarat, and the remaining three sides are surrounded by the Arabian sea. Diu is separated from Saurashtra by a narrow canal. Its enchanting and unique topography makes it a favourite among the tourists, who wish to engage themselves in various activities like parasailing, surfing, paragliding etc.

Soil and Vegetation in Diu

The soil in Diu is neutral to mildly alkaline. Sandy loam soil, which is light brown in colour, is found here. Salt pans, stone pits, rocky creeks, sandy shores of the beaches re the different types of habitat found here. Though there are no natural forests here, about 500 hectares land has been developed into forest area. Most of the plants found in Diu are similar to those found in the coastal areas of Gujarat and Maharashtra. Palm groves and coconut plantations are found in plenty near the beaches. Other vegetation in Diu include trees like Tortolis, Casurina, Procofis, Equisitifolia, Acasias, Fuliflora and Hokka. The Hokka trees, also called the branching palm trees, brought by the Portuguese are found exclusively in Diu. The fruits of these trees are said to have many curative properties.