Art and Culture of Diu

The serene and beautiful hamlet of Diu is a popular weekend getaway for those seeking a respite from the hectic and monotonous routine of the metropolitan cities. The rich Diu culture is a blend of the Indian and the Portuguese culture, a fusion of traditional customs with modernity. The culture in Diu is considered to be an extension of the Kathiawad culture, reflected in the cuisines, practices and beliefs of the people here. The people of Diu are vibrant, fun loving and hospitable. People belonging to different religions and castes live together in harmony, exhibiting, ‘Unity in Diversity’. 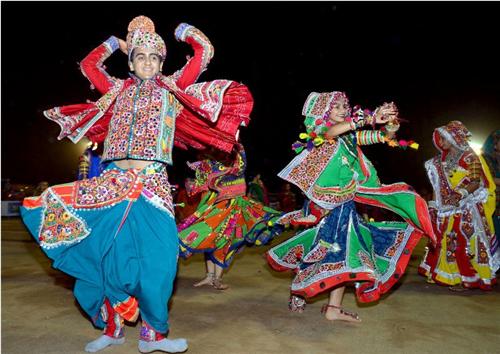 The fun-loving people of Diu consider songs and dances to be an integral aspect of every celebration. Garba is an important traditional folk dance performed by men and women, fully decked in colourful costumes and jewellery. Koli Dance is performed by the fishermen community in Diu. The Folk Dance Festival is an important celebration, where traditional Portuguese folk dances like Mando Dance, Vira Dance, and the Verdigao are performed in slow motion by the elderly population in Diu. The younger generation also join them, keeping up with the traditions of the past. These dances depict the lifestyle of the people in Diu. The songs and dances are performed, adhering to the motto, ‘Drink, Eat, Sing and be Merry’.

The people of Diu celebrate various festivals with great pomp and gaiety. During the Navratri Festival, dedicated to Goddess Amba, people of all ages come together to perform the Garba Dance, to the tunes of devotional songs sung in praise of the Goddess. This festival, celebrated for nine days, attracts people of all communities, and the whole atmosphere is joyous and divine. 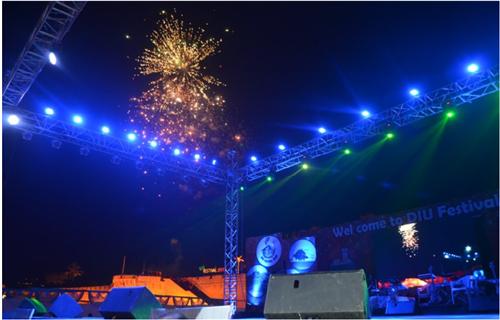 The Diu Festival, organised by the Tourism Department, every year during December attracts hordes of visitors.  It is one of the most important celebrations in Diu, depicting the lifestyle of the people in Diu and keeping alive the past traditions. Christmas, New Year eve, Easter are celebrated here in a grand manner with great fanfare. Diwali, Holi, Id, Janmashtami, Rakshabandhan are other festivals celebrated in Diu.

Hinduism is the major religion in Diu followed by majority of the population. Islam and Christianity are also practised by the people here. The Hindus comprise of the Kharwa, Koli Patel, Koli, Salat, Bhraman, Vanja, Bania, Sanghadia, Baria, Sager, Kamli, Mitna, Mangela, Bhandari, Macchi, Kumbhar and Mahyavanshi, while Dhobia, Dubla and Siddi are tribal population. Momin and Khoja belong to the Muslim community. Due to its proximity to Gujarat, majority of the customs and practices of the Hindus in Diu are similar to those of the Gujaratis.

Gujarati, Hindi, English, Portuguese are the major languages spoken in Diu. English is the official language for communication purposes. Though Diu has greater Portuguese influence as compared to Daman, it is no longer taught in the schools and the number of people speaking Portuguese is fast declining. The creole of Diu, Lingua dos Velhos is rapidly becoming extinct.

Costumes and Handicrafts in Diu

The costumes of the people in Diu are influenced by those worn by the Gujaratis. The ladies wear salwar kameez, sarees, ghaghras and other traditional dresses, on festive occasions. Due to the influence of Western culture, kurta, jeans, skirts are becoming popular, especially among the younger generations. Men prefer wearing shirts, trousers, jeans, shorts, pyjama, shirt, dhoti kurta etc. European costumes are worn by the Christians in Diu.

Various attractive handicrafts from Diu are in great demand, especially among the foreign tourists visiting Diu. Mat weaving is popular among the artisans here. Mats with beautiful traditional patterns are quite popular among the visitors. Ivory carving is another popular art form, practiced by the artisans in Diu. Sea shell and oyster shell items are also in great demand. Tortoise shell craft, where a number of decorative items are made from the shell of the tortoise is a special craft, practiced by the craftsmen in Diu.

Diu is thus a rightly considered to be the perfect fusion of Indian, Portugal and tribal cultures. The multi-faceted and rich cultural heritage of Diu is evident from the festivals, dance forms, customs and beliefs of the people here that are mainly Indian with traces of Portugal influence, here and there.